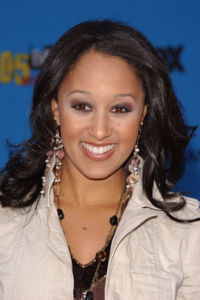 According to People.com Tamera Mowry-Housley is expecting her first child with husband, Adam Housley.  Housley is a correspondent for Fox news.   Mowry-Housley is best known for her childhood roll acting alongside her twin sister Tia Mowry on the sitcom Sister, Sister, which aired for 6 seasons.   The sister starred in a few other productions together, but have now done their individual acting jobs separate of each other.  Although they may not do much acting together, you can watch them together in their reality show called Tia and Tamera that airs on the Style Network.  In the first season of the show documented Tia having her first child(a baby boy), and Tamera starting life as a newlywed.    Now that Tamera is pregnant we can see how she deals with pregnant life on future seasons of her reality show.