Brett Favre is now a Grandfather 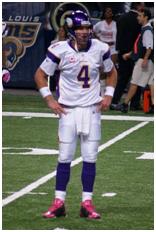 It has been announced that NFL quarterback, Brett Favre, is now a grandfather. His daughter Brittany Favre gave birth to a 7lb 7oz baby boy, Parker Brett, on April 2nd. Brett Favre was with the Green Bay Packers from 1992 to 2007, when he first retired from the NFL. He then came back from retirement and was with the New York Jets for one season. At that point, he retired for a second time from the NFL. He came back from retirement last season and played for the Minnesota Vikings. He took the Vikings all the way to the playoffs. Right now, he is still uncertain about coming back to the NFL. I really cannot blame him. Being a 40 year-old football player is difficult when 40 is seen as ancient in the NFL. Imagine having to retire from the career you have love. Most people retire because they want to do something they love and are passionate about. Brett Favre i has a career where he is doing something he loves and is extremely passionate about. No matter what he decides to do, I hope he enjoys time with his grandson, daughters, wife, and the rest of his extended family.