The “Many Adventures of Winnie the Pooh” will now be available on Blu-ray and HD Digital.  Although the medium of delivery has changed the story remains the same. 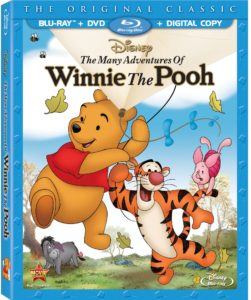 Now the movie will be re-released in Blu-ray and HD Digital.    This will be the same movie, but with some bonus features.

With the Blu-ray, copy viewers will get special features like:

The DVD will have fewer things.  It has the Mini Adventure “Geniuses” and  “The Winnie the Pooh Theme Song.”

The Digital copy has everything that the Blu-ray copy contains, but the special Disney Intermission.