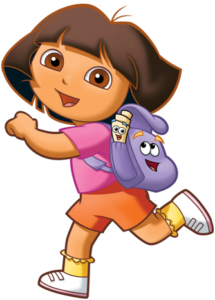 If you are on Netflix you probably already know that “Dora the Explorer’ is no longer being aired through that company. Viacom, the company behind Dora, and Netflix were not able to come to a renewal deal. By the way, many other shows from Viacom are leaving along with “Dora the Explorer”. Other Nick show like “SpongeBob SquarePants”, and “Blue’s Clues” have also been removed.

The removal of Dora from Netflix may be a temporary situation. Netflix hopes to work out a deal where they purchase programs a la carte.
Although “Dora the Explorer” may not be on Netflix, there are still some kid-friendly programs that your child can watch until a new deal can be reached with Viacom.