Ivanka Trump and Husband Jared Kusher are Expecting a Baby 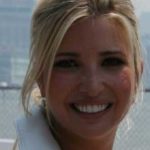 Ivanka Trump announced on twitter that she and her husband, Jared Kusher are expecting a baby.  Ivanka and Jared were married October 25, 2009.    Ivanka is the daughter of Donald Trump and his first wife, Ivana Trump.    Ivanka has appeared alongside her father on NBC’s The Apprentice for several seasons.    Jared Kusher is the owner of The New York Observer.