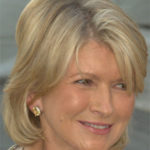 Martha Stewart has is now joining the ranks of celebs like Tom Hanks, Jim Carrey, and Goldie Hawn by becoming a grandparent.  Stewart’s only child, Alexis, welcomed a baby girl into the world on March 8th.  The baby girl, Jude Stewart, was born via a surrogate mother.  According to people.com, Martha has already began showering her granddaughter with tons of gifts (as an doting grandparent should).