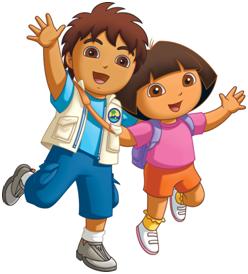 Dora the Explorer and Diego will soon be taking children exploring as part of a traveling museum exhibit tour. Dora and Diego’s key audience will be preschoolers and their parents.

The exhibit will take children and their families into the worlds of Dora and Diego where they will engage in problem-solving and active play. Young children will play along as they join an adventure and learn how to solve problems, be a good friend, and care for animals and the environment. Spanish vocabulary will be incorporated throughout the exhibit to introduce Spanish-speaking skills to preschool children.

In February 2011, the exhibit will open to museum patrons of The Children’s Museum of Indianapolis. After spending some time in Indianapolis the Dora the Explorer and Diego exhibit will go on a 5-year international tour.