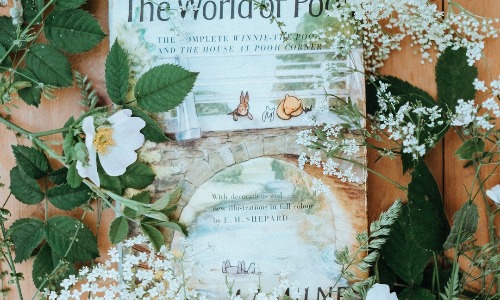 History of Winnie the Pooh

Despite Winnie the Pooh’s gentle nature, his beginnings stem from a time of considerable violence, World War I. When troops from Winnipeg were transported first to eastern Canada before traveling overseas to Europe, the train made at stop at White River, Ontario. This is where Lieutenant Harry Colebourn felt a tug on his heartstrings at the sight of a small black bear cub. A hunter had killed the cub’s mother which prompted Colebourn to purchase her for $20. In memory of his hometown, he named her Winnipeg which was shortened to Winnie out of affection.

This little cub soon became the mascot of Colebourn’s brigade. Winnie even traveled to Britain with his unit. When they arrived at the battlefields of France where they were posted, Lt. Colebourn found shelter for Winnie in the London Zoo. Unfortunately, the lieutenant and Winnie were separated. She was dropped off in December of 1919 and spent the rest of her life there until she passed away in 1934.

However, Winnie became quite the attraction at the zoo. Among one of her many fans was Christopher Robin, the son of A.A. Milne, a London author. Young Christopher began referring to his stuffed bears as Winnie. “Pooh” referred to a swan in a poem by his father, “When We Were Very Young.” Christopher must have enjoyed the symbolism of the poem and begin calling added it to the title of Winnie.

A.A. Milne was inspired by his son’s friendship with Winnie the Pooh and began writing a series of children’s books. Before long, the 100-Aker-Wood was developed, along with the inclusion of new characters: Eeyore, Piglet, Tigger, Rabbit, Owl, Kanga, and Roo. These characters were not without basis. All were other stuffed animals of Christopher’s. Even the 100-Aker-Wood had its own personal appeal; Milne based it off his country home of Cotchford Farm in Ashdown Forest, Sussex.

“Winnie the Pooh” as we know it today was a collaboration of Milne’s writing and E.H. Shepard’s artistic ability. The illustrations of the book were beautiful and evoked feelings of magic in children and adults alike. The first publication was released on October 14, 1926, by Methuen who released three more over the next couple of years.

In 1996, Methuen Publishing Company reported selling over 20 million copies of the first four “Winnie the Pooh” books, but this number does not do justice to its popularity. This statistic does not include the publications by Dutton in Canada and the United States, nor does it include the foreign language publications that are available in more than 25 languages.

Today, “Winnie the Pooh” is considered a staple of Disney. Like many others, Walt Disney’s daughters were fans of the Pooh books. Disney was inspired and brought Pooh to life on the screen in 1966. In 1977, the first feature-length animated film of Winnie was release, “The Many Adventures of Winnie the Pooh.” Today, Disney names Winnie the Pooh second only to Mickey Mouse as the most loved and recognized character in their history.

While “Winnie the Pooh” has undergone some cosmetic changes from the original Winnipeg that traveled with the army, her appeal to children and adults has not been altered. It is almost magical to think how World War I prompted such a character of generosity and gentleness.

Eeyore is a melancholy donkey that seems to always miss the brighter side of things. Although a little gloomy, Eeyore is a great friend to all his friends at the Hundred Acre Wood. He may feel sad at times, but he cares for his friends and tries to be there to help them.   He also knows that he will be helped by his friends Tigger, Winnie the Pooh, Owl, Piglet, Kanga, and Roo.     Over the years these friends have been there for each other and shown what true friends are really about.

Heffalump are mythical creatures that are first introduced in the book Winnie-the-Pooh by A.A.Milne. Heffalump looks most like elephants. In more recent years we have seen Heffalumps and cuter and cuddlier than were first imagined by Piglet, Tigger, and Pooh.

Piglet has always been a very close friend of Winnie the Pooh in the Hundred Acre Wood. Piglet and Pooh have gone on many different adventures together. Although he may be a little timid, Piglet remains a faithful friend.