Kevin Costner has His Seventh Child 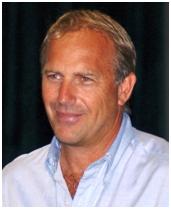 In some cultures 7 is a lucky number. For Kevin Costner 7 has come to represent the 7 wonderful blessings in his life. One June 2, 2010 Costner, at the age of 55, had his 7th child. This is his third child with his current wife, 36 years-old Christine Baumgartner Costner. The couple has two sons together: 3 year-old Cayden Wyatt and 15 month-old Hayes Logan. Costner also has for children from previous relationships.

Costner is known for his many films like Bull Durham, and Dances with Wolves. Although he is a great actor some of his films stay in my memory for those memorable lines or great soundtracks. With Field of Dreams, who can forget “If you build it, they will come.” And Robin Hood: Prince of Thieves had me constantly listening to Brian Adams “(Everything I do)I Do It For You.” That was one of the best love songs ever, probably one of the top wedding songs of the 90s. Another song that tugged at the heart strings was “I Will Always Love You” sung by Whitney Houston on The
Bodyguard soundtrack.

Kevin Costner has created a lasting legacy of being a great actor. But, as most parents do, he probably ranks the legacy he will leave as a parent top on the list.