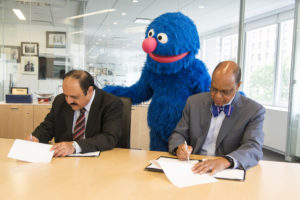 Iftah Ya Simsim, an Arab version of Sesame, is set to make a comeback. Sesame Workshop and the Arab Bureau of Education for the Gulf States (ABEGS) are partnering to bring the program back to the area. Iftah Ya Simsim first aired in Kuwait in 1979 and ran until the Gulf War in the 1990. ABEGS which consists of: Kingdom of Saudi Arabia, the United Arab Emirates, Bahrain, Kuwait, Sultanate of Oman, and Qatar. Sesame Workshop has been working to help bring back Iftah Ya Simsim to the region and provide the some of the same educational benefits that children in the United States experience from watching Sesame Street. Sesame Workshop has worked with many nations to help provide culturally relevant versions of Sesame Street. These versions incorporate, not only the language of the area, but also the cultural experiences that are familiar to each child of the region. One example is the HIV positive Muppet, Kami, who appears on Sesame Square in Nigeria.

Iftah Ya Simsim is scheduled to begin airing once again in 2015. Education experts from ABEGS and Sesame Workshop are collaborating to ensure to that it provides the beneficial educational benefits for children 4-6.